Google is always making changes to how their search algorithms work. It’s constantly tweaking and making improvements. With a 90% share of the search market, it’s no wonder there’s so much attention on Google’s every move! After all, your search rankings on Google directly impact your website traffic.

This week, Google announced the released a January 2020 Core Update. 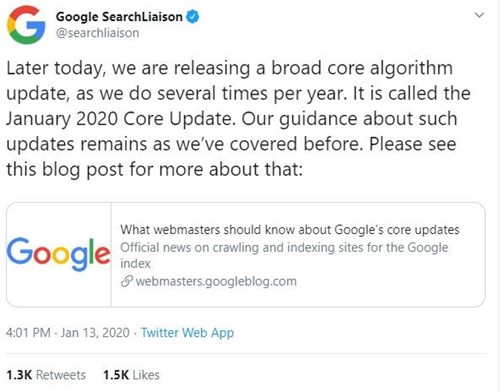 What is a Google Core Update?

A few times a year, the search engine publishes major updates to the algorithm that have more significant effects. For example, think back to the Google Mobile Update in 2015, which encouraged sites to be mobile friendly.

In a statement on their blog, Google said that core updates are ‘designed to ensure that overall, we’re delivering on our mission to present relevant and authoritative content to searchers.’

We already know that Google is constantly making small changes to their algorithms. However, core updates cause more discussion because they involve more significant changes. Although it’s difficult to know straight away the impact of a core update in the long term, it may have changed the way Google calculates importance and weighting of page ranking factors. As the dust settles, the results of the update will become more clear. 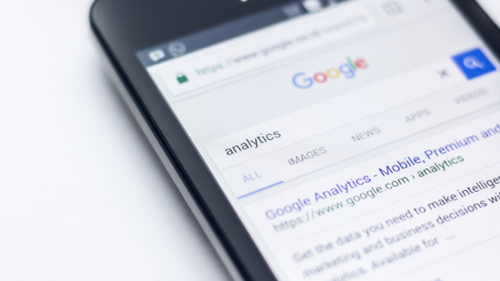 The January 2020 Core Update is the newest in a long line of previous Google updates, as the search engine works to improve the quality of search results. Wondering what other changes Google has introduced in the past?

Here’s an overview of some of the most impactful core updates from the last decade:

Panda Update (2011)
This update targeted spam and content that wasn’t helpful for users. It did this by penalising both thin and duplicate content, as well as content with too many ads.

Penguin Update (2012)
In other move towards quality content, Google turned its focus towards targeting spam from backlinks. It rewarded quality, organic backlinks.

Hummingbird Update (2013)
This update introduced smarter semantic search, and was aimed at better understanding user intent and the context of searches. From this, marketers began to look more at long tail keywords.

Mobile Update (2015)
In a mobile-first world where more searches were being done using smartphones, Google needed to push for sites to be more mobile friendly. Sites that didn’t have a mobile version risked being penalised.

Quality Update (2015)
This was another update that focused on user experience and rewarding sites that were delivering high-quality content.

RankBrain Update (2015)
With the introduction of artificial intelligence to the search algorithm, Google was able to monitor user behaviour and responses in order to learn more about search intent and page value.

AdWords SERP Update (2016)
This update brought changes to how paid search listings appeared by integrating them into the main listings.

Interstitial Penalty (2017)
This applied to sites running interstitial ads that  blocked the users view of content on the page.

“Medic” Core Update (2018)
A broad core algorithm update, it’s widely believed that this has a significant impact on health, finance and ‘your money your life’ pages. It boosted the rankings of high-quality articles giving advice on these issues.

Site Diversity June (2019)
An update that aimed to eliminate multiple listings from the same domain in the SERP, to allow for diverse results.

BERT (2019)
Also known as ‘Bidirectional Encoder Representations from Transformers’, this update in October 2019 introduced the ability to better understand the content of the search by looking at all the words in the search.

...and that brings us to the present day!

So, what do you need to do after a core update?

It’s important that you’re still following Google’s advice and guidelines, and focusing on user intent, quality content and clean architecture. You’ll want to make sure you’re focused on your target audience and offering them useful and relevant content.

Looking to drive more traffic to your website with a successful SEO strategy? Take a free SEO audit today to see how we can help your business grow.